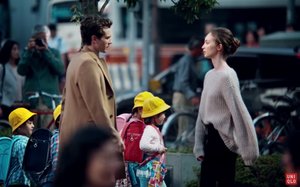 Uniqlo, which has had some stumbles in its bid to introduce America to the Japanese powerhouse, is hoping its first-ever global ad campaign will show people just how serious it is about clothes.

Themed “The Science of Lifewear,” the ads showcase the retailer’s unique approach to clothing, as well as its egalitarian appeal, with clothing it likes to say is “made for everyone, everywhere.”

The campaign, which broke last month in Japan, got its U.S. debut during the Emmy Awards, with its ad airing in the New York/New Jersey market. “We wanted to take the opportunity of our 10th anniversary in the U.S. to make sure people understand what Uniqlo stands for,” says Aldo Liguori, who heads communication for Fast Retailing, the Tokyo-based parent company. “Prior to this, we haven’t focused on over-the-air ads in the U.S., and instead mainly used digital, in-store and transit.”

Shot in Japan, the campaign poses deep questions, asking “Why do we get dressed?” Beyond the obvious (like because most of us would get arrested if we left the house naked), it pokes into the psychology of wardrobe: “Is it to feel warm? Safe?” In addition to invoking science-y words, like “Warm colors release dopamine,” the urban Japanese street scene and the British voiceover offer a hefty shot of multiculturalism, likely to have strong appeal for the urbanites who favor Uniqlo’s utilitarian vibe.

But that urban appeal may be part of Uniqlo’s problems here. While Fast Retailing has been expanding in the U.S. since opening its first store in New York City 10 years ago, it has cut back its expansion plans, from 15 or so per year to about 5. And earlier this year, it shuttered five stores, mostly in suburban locations.

“It’s not a matter of urban versus suburban consumers,” Liguori tells Marketing Daily. “Those stores were closed because they were in locations that didn't generate enough traffic. We’re now focusing on larger stores in key locations that will do better for us.” Its first Canadian store, in Toronto, is set to open this month.

In addition to the introductory brand spot, six different versions highlight core Uniqlo products -- a list that includes jeans, joggers, knits, Ultra-Light Down and its HeatTech fabric. Those are running in the New York and New Jersey market in prime time, late night, sports, and holiday programming. Droga 5 is the agency. “It’s a new opportunity, and we’re very excited,” Ligouri says.

Worldwide, Fast is the fourth-largest specialty retailer of private-label clothing, trailing Inditex, which owns Zara; Hennes & Mauritz, or H&M, and the Gap. But with its “Simple made better” positioning, it’s also fending off cheap-chic chains like Forever 21, Topshop and Primark, the Irish retailer just gaining a toehold stateside. And it’s a challenging environment with consumers being more careful about clothing purchases, cutting into results at both Gap and H&M.

H&M, meanwhile, has been getting plenty of buzz for an ad for its new women’s collection that follows women through some un-ladylike moves. And it’s just launched a campaign for its menswear, once again starring soccer legend David Beckham, with comedian Kevin Hart as his pesky little sidekick.