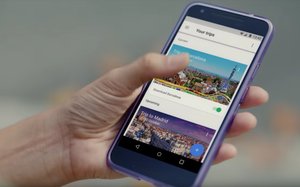 Google is demonstrating a stronger focus on travel data with the launch of the Google Trips travel app, Google Destinations for desktop, and the acquisition of Urban Engines to support route analytics through sensors tied to the Internet of Things (IoT).

The Google Trips travel app -- available for free on Android and iOS and announced Monday -- organizes flight, hotel, car and restaurant reservations, making the data searchable and accessible, even offline.

Downloading the content from the Google Trips app provides the information when there is no Internet or WiFi access. Stefan Frank, product manager of Google Trips, calls the service a "personalized tour guide in your pocket."

The app contains information on the top 200 destinations, attractions, and local locations to map out a day's tour, all based on historic visits by other travelers, wrote Frank in a post.

It's not difficult to image how the data in an individual's phone could provide Google and marketers with signals for recommendations or the ability to target advertisements for accessories they may need to take along.

All the travel reservations are automatically gathered from Gmail and organized into individual trips, so users do not need to search and dig through emails.

The categories contain information on day plans, reservations, and food and drink as well as things to do based on Google Destinations, which Google launched in March 2016.

Google Destinations originally launched for mobile, but the tool is now available worldwide for the desktop. Built into Google Search, Destination allows searchers to compare such things as airfare and hotel rates.

Last week, the Google-backed startup Urban Engines -- which is focused on route analytics like delivery and community -- announced it will become part of Google Maps.

Urban Engines' business model relies on data from connected devices like cars, mobile phones, as well as sensors on street lights, billboards and other hardware with an IP address that make up the Internet of Things. It weaves in information about when traffic is congested and not just where, according to one report.

With the acquisition Urban Engines' co-founder and CEO Shiva Shivakumar returns to Google, where he worked as an engineer for nine years on various projects like algorithm-based Web products such as AdSense, Gmail and Sitemaps, before leaving in 2010.