4As Steps Up Transparency, Threatens To 'Annul' Agencies That Don't Practice It 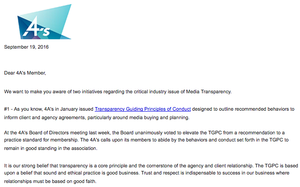 “It is our strong belief that transparency is a core principle and the cornerstone of the agency and client relationship,” 4As President Nancy Hill wrote in a letter sent to the association’s membership today, calling on them to adopt the 4As’ recently ratified “Transparency Guiding Principles of Conduct," and threatening “annulment of membership” for agencies that violate them.

The 4As said it has scheduled nine meetings with members around the country beginning with last week’s Advertising Legal Affairs Committee meeting at the 4As headquarters in New York and running through its Western Region Finance Committee meeting Nov. 16 in Las Vegas.

The stepped-up efforts come as some industry sources -- especially the Association of National Advertisers -- have been critical of the 4As' slow and tepid response to ANA-commissioned studies and aggressive recommendations to improve the transparency of media-buying principles, especially rebates and kickbacks from media suppliers paid to agencies.

The ANA in August called on the 4As to clarify its position on media transparency and invited its board to meet with the ANA board to discuss it at its upcoming annual conference -- Masters of Marketing -- Oct. 19 in Orlando.