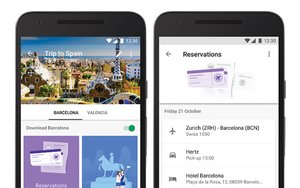 “Google Trips is a personalized tour guide in your pocket,” Stefan Frank, product manager at Google Trips, notes in a new blog post. “We wanted to reduce the hassle and help travelers enjoy their hard-earned vacations,.”

The effort was based on several consumer insights, including a Good Think study showing that 74% of travelers say the most stressful aspect of travel is ironing out the details.

The effort could be bad news for travel-services providers, which are already doing everything they can to remain competitive.

Earlier this year, for example, TripAdvisor bought mobile application Rove, which enables users to log their movements based on GPS coordinates and other data.

Following Expedia’s recent buyout of Travelocity, more travel brands are engaging in cross-partnerships to augment their awareness among consumers and offer an increasing amount of features to entice new users.

Google’s new app lets users break their voyages into categories, including day plans, reservations, things to do, and food and drink. As Web access can be spotty in unfamiliar regions, the entire app is also available offline -- so long as users remember to tap the “Download” button.

The app comes prepackaged with popular sights and attractions in top 200 cities around the world. It also helps users keeping track of flight, hotel, car and restaurant reservations.