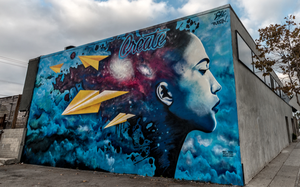 Zappos, the perennial winner in customer-service rankings, just gave its best customers something to smile about: Hometown murals, created by local graffiti artists.

“We wanted to find a way to thank our very best customers,” says Kelly Teemer, awareness marketing lead for Zappos. “And we were also looking for a way to celebrate the 10th anniversary of our 10 core values.” So when Beautify Earth, a nonprofit devoted to easing urban blight with a goal of 1 million murals, came to the Las Vegas-based e-commerce site, “it seemed like a wonderful opportunity to reward those customers,” she tells Marketing Daily.

For the mural project, the company decided to reward the 10 cities with the most enthusiastic Zappos shoppers one of its core values, and asked the artist to interpret it in a mural, with locations chosen for high visibility. Miami got “Deliver WOW through service;” Baltimore “Embrace and drive change;” Austin “Create fun and a little weirdness;” Los Angeles “Be adventurous, creative, and open-minded;” San Francisco “Pursue growth and learning;” Boston “Build open and honest relationships with communication;” Philadelphia “Build a positive team and family spirit;” Chicago “Do more with less;” New York “Be passionate and determined” and San Diego “Be humble.”

“We want to be viewed as a company with a lot of soul, not just one that sells shoes,” she says, “so it makes sense for us to share our core values in this wider, more visible way.”

It’s just the latest move for Zappos, a division of Amazon, in making urban revitalization its corporate cause. It has already generated plenty of accolades and criticism for the Downtown Project, created by founder Tony Hsieh pouring $350 million into the seedier part of Sin City back in 2013. (The project, which includes the Container Garden, a shopping area with stores and restaurants set up in old shipping containers all guarded by an enormous praying mantis sculpture; the Life is Beautiful Festival and plenty of trendy new bars, still hasn’t delivered the robust start-up climate Hsieh was hoping to create.)

Besides a video about the effort, Zappos is relying on social media to spread the word about the murals, and that is also in keeping with the brand’s persona, says Teemer, who says the Austin mural, with its dancing cowgirls, is probably her favorite. “Traditionally, Zappos is more into experiential strategy,” she says, “so this fits us.”