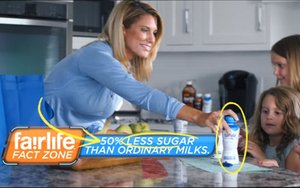 Harbaugh seems a natural choice. He’s often said that drinking milk helped him reach his 6’ 3” height and become an NFL quarterback, and recommended that aspiring athletes in particular drink as much milk as they can (whole milk being “ideal”).

The videos promoting Fairlife — which comes in whole, reduced fat, fat free and chocolate milk varieties — focus on conveying that the ultra-filtered milk brand has 50% less sugar and more protein and minerals than regular milk, as well as no lactose.

The videos, including a 54-second version (below) and five 16-second shorts, show Harbaugh analyzing and passionately expressing approval of video footage of his wife, Sarah, and his kids consuming Fairlife.

Referring to himself, he also notes that less sugar means that “Captain Completion” can “fit back into his old [quarterback] armor.”

All of the “Harbaugh Highlights” videos are viewable on YouTube. They’re also being featured on Fairlife’s social media channels.

The creative is from Onion Labs, The Onion’s sponsored content agency unit. Onion Labs has been the agency of record for Fairlife’s newest brand, YUP!, since July 2015, but this is the first time it has worked with the flagship brand.