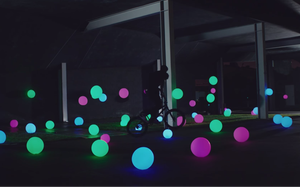 With artistic overtones and an eye for design, Dots -- maker of mobile puzzle games Dots, Two Dots and Dots & Co -- is looking to broaden its appeal beyond traditional gamers with a new marketing campaign, built around the line, “Play Beautifully.”

“‘Play Beautifully’ is not just a tagline -- it’s a brand platform,” Ondriona Monty, chief marketing officer for Dots, tells Marketing Daily. “[It’s] a creative platform that, in its simplest form, captures the spirit of Dots with creative people.”

The effort launches this week with a digital video featuring BMX athlete Nigel Sylvester. The atmospheric piece depicts Sylvester riding his bike around amidst spherical colored lights (reminiscent of the dots in the company’s signature game), jumping over them, biking around them, and interacting with them.

“Ultimately, this first 'Play Beautifully' film seeks to inspire our current users and entice a new wave of users, by elevating the Dots’ brand ethos outside of traditional gaming narratives,” Monty says. “I want to provoke curiosity. It’s commercial in nature, but it’s designed to get attention.”

The video is targeted at both the games’ core audiences (the three Dots properties have been downloaded more than 100 million times) and non-gamers who may be unfamiliar with the games, particularly those in the worlds of design, fashion and music, Monty says.

“We build games that appeal to non-gamers,” she says. “Everything we’ve done to date has been [focused on] design and experience.”

The video will run on Dots’ social media channels as well as channels designed to appeal to fashion, design and music creative sets, as well as some “tier one” digital media buys, Monty says. Further videos — for which the company is still reviewing pitches — will revolve around the ideas of movement and technology and movement, she says.