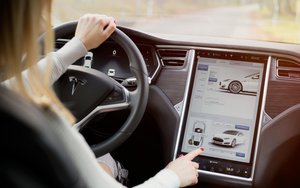 Tesla’s Model X has expanded the automaker’s reach to attract younger and more affluent customers, according to Edmunds.

“If Tesla is going to succeed over the long term, it needs to break through to all shoppers and not just rich early adopters who tend to skew older and male,” says Jessica Caldwell, Edmunds.com executive director of industry analysis, in a release.

“The company certainly has a long way to go with affordability, but Model X has undeniably brought in more female buyers and Gen X’ers to the Tesla brand. That’s an encouraging sign as Tesla takes a make-or-break plunge into the mainstream market with the upcoming Model 3.”

In the first nine months of its life, only 14% of Model S buyers were women. The Model X, on the other hand, has more than doubled that figure, with women making up 30% of its buyers. Generation X, the forgotten generation sandwiched between Baby Boomers and Millennials, is the most important demographic for Tesla, but especially for Model X. Three out every five Model X owners are between the age of 35 and 54, compared to only about half of Model S buyers.

The West Coast (California, Washington and Oregon), which had accounted for 64% of Model S sales, is proving less dominant for Model X; these states accounted for 55% of the X's sales. Wisconsin has shown the most notable increase of any state in the U.S. The Badger State, which made up a paltry 0.3% of Model S buyers in the sedan’s first nine months, accounted for 2% of Model X sales.

Neither Model X nor Model S falls within the price range of the average car shopper, but Tesla’s audience has only grown wealthier since the SUV’s introduction. Model X is selling to a slightly more affluent audience, with 87% of buyers having reported income in excess of $100,000, compared to 78% of Model S buyers.

“When Tesla Motors was cranking up operations, it teamed with sports car maker Lotus to quickly acquire the expertise to build vehicles in small lots,” Nerad says in a statement. “Now that scenario could be repeating itself with the rumored purchase of McLaren, another low-volume sports car producer, by Apple.  There have been suggestions that Apple’s auto efforts have been stumbling recently, so the acquisition of McLaren could, quite literally, get the company back on the fast track.”

Apple buying a carmaker has always made more sense than building a car from scratch, provided the deal is of good value says Akshay Anand, analyst for Kelley Blue Book.

“Creating a car is an incredibly hard task that requires in-depth knowledge, and McLaren has the added benefits of a great brand combined with a data-focused culture, which Apple undoubtedly appreciates,” Anand says. “ It's clear Apple still has its eyes on the autonomous car business, and wants to be a relevant player in the future.”