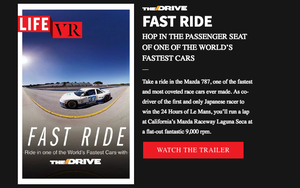 Time Inc. has debuted a dedicated virtual reality platform that will host all VR content for the company’s brands, called Life VR. The platform’s name is an extension of the Life brand, a magazine that shuttered in 2007 and now exists as a photo section of the main Time site.

Chris Hercik, SVP Content + Creative of The Foundry, Time Inc.’s content studio, called VR "an exciting new tool in content creation," stating that it allowed the company to "push the boundaries of this leading-edge technology as an entertainment and news medium" in creative development distribution methods.

Life VR is available for free on desktop and mobile web across Time Inc. sites and as an app for iOS and Android. It is also available for Cardboard, HTC Vive, Oculus Rift and Samsung Gear VR powered by Oculus.

Time Inc. plans to produce more 360-degree videos later this fall, per a spokesperson, and across other Time Inc. brands, which include Sports Illustrated, People and Entertainment Weekly.

“Today, we are launching with very powerful and distinct experiences, setting the tone for what our viewers can expect on an ongoing basis from Life VR. We have an aggressive editorial road map and live experiences planned for Life VR,” stated Mia Tramz, managing editor for Life VR.

“As we continue to build out our capabilities in VR and simultaneously ramp up our production of 360 video across the company, the pace of new LIFE VR content will also increase,” she added.

This week, the platform launches with experiences like “Defying the Nazis,” the VR companion to the new Ken Burns PBS documentary. This video takes viewers on a journey by boat to leave Nazi France and seek asylum in America.

Another video, “Fast Ride” from The Drive, puts viewers in the driver’s seat of the Mazda 787 to run a lap at Mazda Raceway Laguna Seca. In addition, “LUMEN” is a nonlinear interactive experience that helps users de-stress in a bioluminescent forest with breathing exercises and a soothing soundtrack.

Time Inc. has been experimenting with VR since last year. In October, it unveiled virtual reality experiences for InStyle and Sports Illustrated Swimsuit photo shoots.