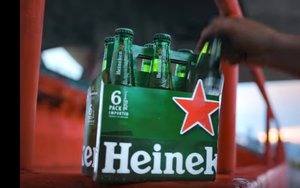 Heineken has an always on search strategy, even when buying display ads. Not just the paid ad kind running on Google, Bing and Yahoo, but the search for city landmarks to improve American structures and neighborhoods.

Its latest Cities project took the beverage company to the abandoned Miami Marine Stadium, raising funds for restoration after Hurricane Andrew in 1992 shut it down.

Jasen Kelly, VP of shopper marketing at Mediavest Spark, a unit of Publicis Groupe, points to a campaign he calls internally — Heineken Credentials — which ran on digital, mobile and out of home from May through August 2016, focusing on the key three ingredients in every bottle.

And while it may seem as if the well-known beer brand might launch one campaign after another, the most recent with Yieldbot proved to yield a significant return on investment, Kelly said.

The campaign that ran during the holidays in 2015 struck a chord with consumers. The message, Spark Your Holiday, linked Heineken to holiday festivities. The real-time campaign targeted consumers in places focused on holiday entertaining.

"We don’t have a lot of room for waste," PER Kelly, who says that is why the company does not take "a programmatic approach, which produces cheap and efficient impressions, but it won't necessarily drive sales.

For this campaign, Heineken and Mediavest Spark turned to Yieldbot to reach people using digital media at the exact moments they make beer, food and related shopping decisions.

Targeted segments were inserted into Yieldbot's platform, looking for browsing behavior in real-time. Ads would serve up related to searches for holiday recipes or family events, driving consumers to redeem discounts at Ibotta, a mobile app service that provides discounts and incentives based on Heineken purchases. If the consumer bought a 12-pack of Heineken, for example, they would receive a $4 reward in their PayPal account.

In less than two months, the Heineken ads running through Yieldbot's platform experienced a dramatic return on ad spend and increased in-store sales by 4.3% measured by IRI, a market research company that ties in-store sales with digital campaigns for the consumer packaged goods industry. Yieldbot also delivered a click-through-rate (CTR) that was triple the industry benchmark of 0.10%.