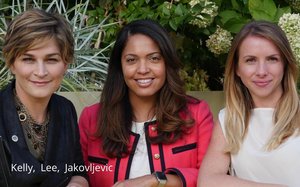 Thought leadership is the new innovation for 2017. At Spotify, it comes from three women who head up major roles in advertising and marketing. They are helping to create personal experiences for listeners through streaming music.

In those personal experiences that support ad targeting, advertisers find "declared moments," says Liberty Kelly, head of sales for the Americas. She joined Spotify in April 2016 to be part of a progressive working environment that supports programs such as the employee-based initiative Women @Spotify.

The "declared moments" are shared through the tempo,the tone of the music and the content in the playlists at very specific moments. Playlists that listeners create and name, such as "breakup," "shower" or "workout," remain one signal used to target ads.

Danielle Lee, VP of global partner solutions, says she focuses partly on native advertising and video. Project Playlist, a native ad unit, launched earlier this year, and the company plans to expand the service. "We're looking at ways to tap into real-time moments and ways to combine sequencing of messaging using video, display and audio," she said.

Often, those ads are served through programmatic channels, a division led by Jana Jakovljevic, global head of programmatic solutions and a Spotify user since 2009. She leads some of the most progressive and innovative processes for the streaming music company. The company launched programmatic audio ad targeting a few months ago.

A study released by the American Association of Advertising Agencies during Advertising Week reveals that members report the industry has not done enough to improve diversity. About half of respondents participating in the survey believe the agency culture is still discriminatory, but not as obvious as it was in the past.

More than 60% of respondents agreed somewhat or completely that advertising agencies used to be more racist than they are now.

Overall, woman are still underrepresented at every corporate level, according to a study released by McKinsey & Company during Advertising Week.

Based on data from 132 companies, women are promoted and hired at lower rates than men. Fewer women become senior leaders and at senior levels, women shift from line to staff roles with few on the path to becoming CEOs.