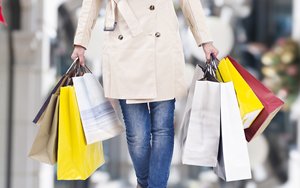 In one of the first major holiday forecasts of the season, retail experts are predicting a healthy rise in U.S. spending, between 3.6 and 4%, topping $1 trillion. And in e-commerce, the gains are likely to be between 17 and 19%, according to the new Deloitte report, between $96 and $98 billion, while digital interactions are likely to have an impact on a much larger slice, influencing an estimated 67% of all holiday sales, or about $661 billion.

The New York-based retail consultancy says steady gains in the economy and a beefy labor outlook are fueling the gains, and that consumers aren’t likely to let the Presidential elections dampen seasonal spending.

And while consumers can expect to see the usual hoopla from the largest retailers, right down to more pre-Thanksgiving pushes and an even blurrier approach to Black Friday, they’ll likely find plenty of deals small and mid-sized stores. In fact, gains from those stores are currently more of a disruptive force than e-commerce, it says. Because they offer better niche products and experiences, that group has been stealing about $200 billion in sales each year from the big stores, a trend Deloitte expects to continue this year.

“Consumers have ramped up their spending this year on the back of a strong labor market,” says Daniel Bachman, Deloitte’s senior U.S. economist, in announcing the findings. “While attention toward presidential elections may be a temporary distraction in the early part of the holiday shopping season, it should not have a negative impact on sales, and retailers may benefit from a pickup in postelection consumer spending.”

Earlier this year, Kantar Retail forecast a 3.8% rise, including a 16% spike in online spending, making it the best season for e-commerce in five years.

But retailers themselves may not be as bullish, judging by their seasonal hiring plans. Hiring is up substantially at JCPenney, while both Target and Kohl’s are adding the same number of holiday helpers as last year, at 70,000 and 69,000, respectively. And Macy’s is adding just 83,000, a 2% dip from last year.