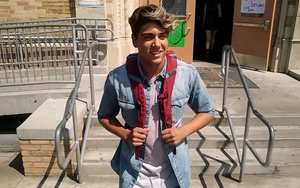 Just think about how popular “Damn Daniel” and other favorite viral videos would have been if they had been shot on better phones.

Imagine no more. To introduce its new V20 Smartphone, LG is reimagining popular viral videos by reconciling them as if they were shot on the higher-quality phone, which includes wide-angle capabilities, high-fi audio and video stabilization.

“We often get asked to [create] viral videos. But it doesn't really work like that,” says Rob Zuurbier, partner and managing director at SuperHeroes New York, which created the campaign. “But what better way to raise awareness and showcase the features in a single-minded way that actually captures audiences’ attention?”

The first video in the three video series depicts Daniel Lara, who gained attention earlier this year in a social media video that featured his friend Joshua Holz exclaiming “Damn, Daniel!” several times (and also a couple of “back in the white Vans!” exclamations). The video, which was uploaded to Facebook, Snapchat and Twitter, captured the Internet’s attention and made the two teens brief stars.

The new LG video reimagines the original by repurposing it as a ’90s-style R&B music video. Lara is shot (horizontally, this time) in high-definition video, leaving his school. A quartet of singers croon, “He’s back at it again with the white Vans/So smooth, he ain’t even tryin’.” They also sing the glories of the new phone: “I can go all out, super loud/With this hot AOP-mike, I can even shout.”

“The key message is, ‘Your next video may not be this smooth, but it will be smoother than your iPhone,’” Zuurbier tells Marketing Daily. Both the video and audio for the promo were recorded on the device. The R&B group also fined a series of short tutorials about the phone’s key features.

With the campaign, LG is hoping to engage consumers with a high number of video views and shares on social media, he says. In its first 18-hours, the “Daniel Remastered” video had garnered 1.7 million views and more than 4,000 shares, he says.

“When you have shares going, that’s when you know people are watching it and enjoying it,” he says.

The agency has two other videos prepared in the coming weeks. Each of them will highlight different features on the new smartphone and will be targeted at different demographics. Zuurbier wouldn’t share the subjects, but noted one would be one his mom would recognize.