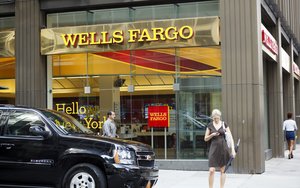 Wells Fargo and Samsung are both under fire and have seen their consumer perception fall, according to YouGov BrandIndex.

However, neither brand has yet incurred the declines of Chipotle and Volkswagen.

YouGov BrandIndex measured Chipotle, Samsung, Volkswagen and Wells Fargo with its Buzz score metric, which asks respondents: "If you've heard anything about the brand in the last two weeks, through advertising, news or word of mouth, was it positive or negative.”

Buzz scores can range from 100 to -100 with a zero score equaling a neutral position. A score of 35, for example, means that 35% more people said they were positive than negative about the brand.

In the past two weeks, Samsung fell 27 points and Wells Fargo dropped 28 points. Wells Fargo, starting at a relatively low Buzz score (common among banks), is now at -25, compared to Samsung at -2.

By comparison, Volkswagen fell 50 points, bottoming out in early October last year with a -40 Buzz score. Nearly one year later, they are about 12 points below where they were trending before their crisis broke.

Chipotle dropped 40 points over nearly four months — a longer period than any of the other brands in this research — and is also currently trending about 12 points below their pre-crisis levels. It has hit a wall over the past few months, unable to come back any further, according to YouGov BrandIndex CEO Ted Marzilli.

“Based on historical data on major crises we've tracked for nearly 10 years, some brands may take much longer than others to recover,” Marzilli tells Marketing Daily. “For example, Wells Fargo may remind consumers of the bank meltdowns from 2008. That rekindling of bad memories may extend the recovery for them. It may Take a year or more for them to get back on their feet perception-wise.”

Samsung is moving very quickly with replacement products, which should please its fan base and help them move on, he adds. Volkswagen is already bouncing back but seems like it may take longer because more revelations keep popping up.

“Chipotle's biggest obstacle is the quality piece,” Marzilli says. “After years of basing its brand on freshness, they have to do more convincing to win back their trust. So far, it hasn't been able to bring consumers back fully on board, and that's why they're rolling out another campaign now.”

The best crisis PR experts in the world can’t do much to spin what has occurred, he says.

“Once you are called before Congress and grilled by Elizabeth Warren in a viral video, the train has left the station reputation-wise,” Marzilli says. “Chipotle’s management took too long to face the crisis publicly last fall, and that contributed to a longer and more sustained decline — they could have addressed the situation much quicker and in a high-profile way.”