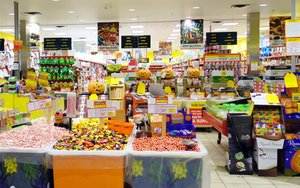 In addition to antagonizing friends and family with either Donald Trump or Hillary Clinton rubber masks, Americans will spend $8.4 billion this Halloween -- the highest since it began tracking spending 11 years ago, the National Retail Federation is predicting.

With some 171 million Americans planning to mark the holiday somehow, that translates to about $82.93 per celebrant, up from $74.34 last year.

The survey, conducted for the Washington D.C.-based trade group by Prosper Insights and Analytics, estimates that 71% of consumers intend to pass out candy to trick-or-treaters, 49% will make their home look spookier, 47% will dress up in a costume, and 46% plan to carve a pumpkin. About one-third will either throw or attend a party, 30% plan on trick-or-treating with their kids, and 16% plan to dress a pet in costume.

The survey -- which included some 6,800 adults -- says discount stores are the most likely place for shopping, named by 47%, with 36% heading to a specialty Halloween/costume store, up from 33% last year. Some 26% will make Halloween purchases at grocery stores, 23% at department stores, and 22% in supermarkets, 23% online.

Second-hand stores are also a big destination for costume shoppers. A new survey from Savers, a chain of thrift stores, says that surprisingly, it’s the 35 to 44 crowd -- not Millennials who are most eager to party: That group plans to hit at least three costume events this season.

While there’s no denying the influence of the elections, the survey predicts Pikachu will overpower politics, with respondents one-and-a-half times more apt to be inspired by Pokémon Go characters than candidates. But expect a lot of orange-hair comb-overs: When comparing the two parties, 52% of the those surveyed say Republican candidates are likely to have better costumes.

Among younger respondents, the Bellevue, Washington-based chain says there’s plenty of Millennial love for superheros, with the Avengers winning among those 25 to 34, and Star Wars carrying the day among those 45 and older.

Gen Y revelers are also most interested in costumes that make them look “beautiful, handsome sexy,” the survey finds, at 40%. But overall, 28% of people looking for costumes want their look to be scary, not hot.