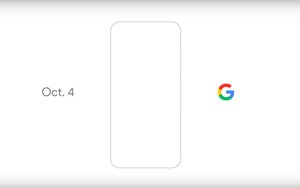 he Google Store has been ramping up its presence on Twitter in preparation for another hardware launch.

Signals continue to become stronger that the Mountain View, California company will take on the Cupertino, California giant Apple -- this time with a smartphone made by Google, which has repeatedly been met with a bit of controversy.

With Advertising Week getting underway in New York on Sept. 26, reports seem to suggest that shortly after, on Oct. 4, the company will unveil its latest smartphone, adding one more piece of connected device to an increasingly growing line, from a home hub to watches — all running on the Android operating system.

The latest video ad teaser appears on YouTube, but The Verge calls attention to a building-size advertisement in the shape of a smartphone, as well as pictures of a statue in Brooklyn Bridge Park shared on Reddit by dolan313.

Google has pushed its hardware through advertising before, and on occasion searchers have found Nexus devices on the Google home search page under the search box.

From Internet access through fiber and Home, the Internet of Things-connected hub, now the company's sharing the hashtag #madebygoogle, which could become more telling than the oversized advertisements.