JBL Gets To The Bottom Of 'Deflategate' 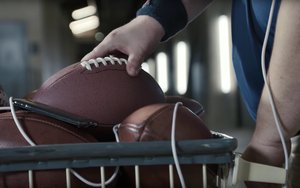 So maybe that whole “Deflategate” brouhaha was just the result of some poor technology, specifically headphone cords.

In a bid to be more entwined with popular culture, JBL is making light of Tom Brady’s and the New England Patriots’ misfortune about using slightly deflated footballs during last year’s playoffs. A new ad, which began airing at the beginning of the NFL seasons (when the Patriots played the Cardinals), posits an alternate theory about what happened to the footballs.

The spot depicts an equipment manager, distracted while listening to corded headphones, accidentally getting caught up with the inflation machine at a critical moment. Though he knows some of the balls are not inflated to regulation specs, he shrugs it off just before the game starts.

“JBL has been playing the space of wireless headphones what they call ‘cordfails,’” Gerard Caputo, executive creative director at JBL agency BBH NY, tells Marketing Daily. “It started out with little things like cords being ripped out of stuff. We were looking to take it a bit further and have a bit more impact on the world.”

The idea was also a way for JBL to connect with the football audience, without a league sponsorship or promoted athlete. The notion to closely tie the company to the controversy surrounding the Patriots’ season came before the media buy, Caputo says. “It’s great when you have a client that’s nimble and flexible enough to rewrite their media strategy around an idea,” he says.

The spot, which initially ran on Sept. 11, has achieved nearly 12 million views on various social channels and has been the single most-viewed piece of JBL content within 36 hours of its launch. The engagement (including 33% above average on Instagram) was part of the strategy to be in the conversation before returning to its less pop-culture specific advertising, Caputo says.

“This has a bit of a shelf-life to it,” he says. “There’s other stuff that’s going to switch to the general message. This was to create a bit of a spark and conversation.”