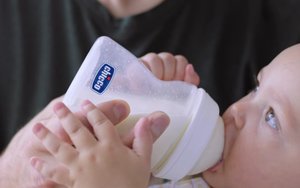 Artsana USA, Inc.’s infant brand Chicco is celebrating new moms as they navigate the realities and challenges of modern motherhood.

A video, which features a new mom receiving a "360-degree" performance review a few months after returning to work from maternity leave, is part of the brand’s #NeverStopGrowing campaign.

The campaign was created and executed by Chicco’s U.S. agency partners, MullenLowe and MediaHub. The video is supported by media, social and influencer partnerships.

Like so many moms, she becomes her toughest critic. But when the tables turn and she experiences the praise, awe and gratitude coming from those touching all aspects of her life -- even her baby -- her perspective changes. She sees, feels and understands the monumental job she’s doing in her roles as a mother, daughter, sister, friend, wife and more.

The effort is linked to Chicco’s new NaturalFit bottle-feeding collection that bio-mimics breastfeeding. For many new moms, feeding their child can be a great source of both solace and stress.

Research by the company revealed the “emotional tug of war” mothers face. Moms are performing many new roles, but they don’t believe they are performing any role as well as they would like, said Brenda Liistro, general manager of feeding and care for Chicco in the U.S.

“We hope our campaign will provide everyone who knows a new mom a glimpse into her reality and inspire them to be supportive, understanding and uplifting,” Liistro tells Marketing Daily. “After all, chances are the moms (and dads!) around you have no idea how well they’re really doing.”

Regardless of whether you are a working mom, a work-from-home mom or a stay-at-home-mom (or something in between), the feelings of new motherhood are universal, Liistro says.

“We’re aiming to encourage and empower new parents to #NeverStopGrowing by celebrating them and their efforts,” Liistro says. “The concept pushes against the antiquated notion that having a baby means putting one’s “self” on a shelf — a notion Millennial parents outright reject (but still sometimes struggle to live up to).”