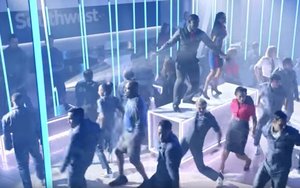 Southwest Airlines is highlighting its playful personality via a musical campaign that includes employees from airports across the country lip-syncing and dancing.

Created by lead agency GSD&M, the effort, themed “Yes,” features songs like the classic “Any Way You Want It” by Journey and “Whatever You Like” by hip-hop’s T.I.

The campaign is geared toward both current customers and those who haven’t flown Southwest before, says Bill Tierney, senior director, marketing communications and planning.

“This campaign puts employees, music, and lip-syncing at the forefront of everything,” Tierney tells Marketing Daily. “Employees are the heart of Southwest. They make the day in and out of the company tick and offer an enjoyable experience along the way.”

The airline has historically had a national advertising platform in NFL media that it uses to launch a broader brand story.

“Because fall is a slower leisure travel period, we’re using this particular opportunity to remind potential customers what Southwest Airlines is all about,” Tierney says. “It’s about inspiring people to travel. This campaign leans on the messages of great low fares, exciting new international destinations, and our incredible Rapid Rewards frequent flier program.”

Traveling is supposed to feel positive, he adds.

“Whether you’re traveling to see a loved one, a place you’ve never been, or from one meeting to the next, travel should feel like a ‘yes,’” Tierney says. “Southwest does our best to create that experience every day, and this campaign is us taking that to another level with music and our employees at the forefront.”

The campaign includes four TV spots airing on national broadcast and the NFL Network that will run nationally into January. The effort also is supported by digital, print and OOH assets. Southwest will also launch more activations on Facebook and Twitter for “Yes” in the coming weeks.

To further demonstrate what “Yes” feels like, Southwest will launch activations across the country in the coming months, surprising customers with unforgettable moments and experiences.