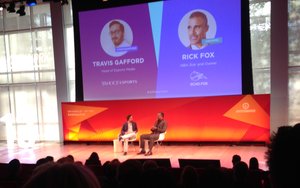 The shift of consumer consumption to live video continues to present opportunities for advertisers if they focus on the right types of content, according to the Live Video panel at Advertising Week 2016 in New York City.

While the miscalculations over time spent watching videos by Facebook have ignited controversy, Yahoo's panel did not address metrics. Instead, panelists discussed how sports, finance, and electronic sports attract millions of views. And these viewers are amenable to ads

MLB's Gersh says three main things have helped make live video popular and accessible since the league first streamed a game in 2002. First, the explosion of bandwidth enabling HD quality content to appear on 60" screens makes it easy and enjoyable. The evolution of mobile devices lets people access content anywhere and any time and the proliferation of connected devices have made it easy for fans to engage in a variety of content.

While sports have a well-established partnership with advertisers, Yahoo believes that finance has a great untapped potential with its 75 million monthly viewers. Last year, the online platform started streaming live financial events, such as developer conferences and investor events.

Now Yahoo is seeking further engagement with these money mavens. More than 1.2 million viewers watched Yahoo's broadcast of Berkshire Hathaway's annual meeting in 2016. For the first time in the company's history, Yahoo was the exclusive partner to broadcast this Omaha, Nebraska shareholder meeting. Scottrade and Ameritrade were key sponsors. Yahoo Finance editor-in-chief Andy Serwer worked with Warren Buffett to integrate advertisers in an organic manner.

Now, Yahoo wants to turn this event into the "Super Bowl of finance," says Utzschneider. Yahoo will exclusively live stream the event on May 6, 2017, which will be taken to a "whole other level," says Serwer. Yahoo is borrowing from the structure of the Super Bowl to monetize the entire day, including a pre-game program and half-time show when Berkshire Hathaway takes its lunch break.