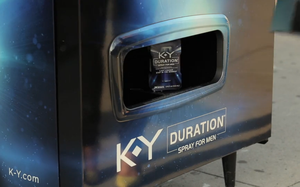 No, your ears did not deceive you: There were men on the streets of New York, screaming about their premature ejaculation.

To introduce its new “Duration” spray, which uses lidocaine to delay premature ejaculation, Reckitt-Benckiser K-Y brand set up a vending machine that encouraged men to loudly admit they have experienced the disappointment that comes with “PE.”

The louder they proclaimed their experience, the better the prize the vending machine dispensed. (Prizes included a Fitbit, restaurant gift certificates and samples of the Duration spray. The effort was all filmed for video.)

The guerrilla marketing effort was just one element in the company’s wider efforts to introduce the spray, while demystifying the myths of premature ejaculation. In addition to the vending machine — which will appear in other markets, so watch out — Reckitt-Benckiser, K-Y and agency Havas New York have developed television advertising that pokes fun at the idea of men using distractions (baseball, grandmothers) to maintain coital control. In addition, a digital spot depicts men in a gym locker room discussing “pre-jack” as if it were a regular topic, like last night’s game.

Out-of-home executions (billboards, subway ads and taxi TVs) in New York and Las Vegas use commuter puns such as “Don’t Get Off Too Soon” and “Arrive on Time.”

The entire campaign is based on the insight that 89% of men said they would like to last longer in the bedroom, and 80% said they experienced the dismay of finishing before they wanted. Despite those percentages, the issue is still not talked about openly, which gave the company the opportunity to break new ground.

“If a man has ever wanted to last longer, he may have experienced PE,” said Karen Chisholm, K-Y marketing director, in a statement. “By infusing humor and cleverness in our creative, we are helping to de-stigmatize a sensitive topic and provide an effective alternative to the unreliable distraction techniques men commonly use today.”