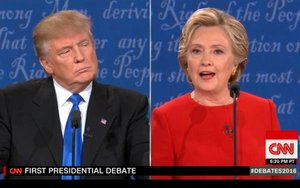 For the debate coverage running from 9 p.m. to 10:45 p.m., NBC tallied the most viewers overall of any individual network -- 18.2 million viewers. ABC was next with 13.5 million, followed by CBS with 12.1 million. On the Fox broadcasting network, there were 5.3 million viewers.

Among the other networks, PBS scored 3 million viewers; Univision, 2.5 million, and Telemundo, 1.8 million. Azteca TV also aired the event, but no specific data was released.

For the big four broadcast networks, viewing results were up 25% from the first presidential debate in 2012, which took in 67.2 million coming from 12 TV networks.