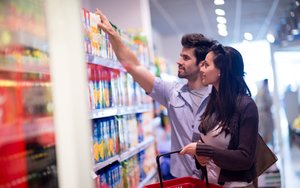 It’s official: Even before it’s finished the long, contentious process of defining “natural,” the Food and Drug Administration is also taking on redefining how “healthy” can be used in food labeling.

This morning, the agency announced that it is initiating the public comment process as the first step in the “healthy” redefinition.

The agency also released guidance saying that during the reevaluation process, it will use “discretion” by not enforcing the current definition for foods that meet certain nutrients criteria.

In addition to taking written comments, which must be received by January 26, 2017, the FDA will at some point hold live public hearings.

The FDA acknowledged the need to reevaluate its rules on the use of the term back in May, when it reversed its earlier stance that Kind bars must stop using “healthy” in their labeling because the products didn’t meet the agency’s requirements.

Kind, which was hit with lawsuits based on that 2015 warning letter from the FDA, filed a citizen’s petition to get the agency to update its regulations in this area — which, Kind pointed out, conflict with current nutrition research and the latest Dietary Guidelines for Americans.

Specifically, Kind pointed out that to meet the current “healthy” labeling requirements, most foods have to meet the “low in saturated fat” claims criteria. That means that foods like nuts (a core ingredient in Kind bars), avocados and salmon can’t use the “healthy” claim, while foods like “fat-free puddings and sugary cereals” can use it, the food maker noted.

In a newly posted blog on the FDA site, Douglas Balentine, director of the FDA’s Office of Nutrition and Food Labeling, also cites the recent publication of final rules on the revised Nutrition Facts label as a reason for revisiting the “healthy” rules.

“We know that many consumers use the Nutrition Facts label, especially when they are buying a food for the first time,” he writes. “Often, there are also a lot of other terms on food packages such as ‘healthy,’ ‘low in fat,’ or ‘good source’…As our understanding about nutrition has evolved, we need to make sure the definition for the ‘healthy” labeling claim stays up to date. For instance, the most recent public health recommendations now focus on type of fat, rather than amount of fat.

"They focus on added sugars, which consumers will see on the new Nutrition Facts label. And they focus on nutrients that consumers aren’t getting enough of, like vitamin D and potassium. By updating the definition, we hope more companies will use the ‘healthy’ claim as the basis for new product innovation and reformulation, providing consumers with a greater variety of ‘healthy’ choices in the marketplace…”

He also indicates that while it’s working on the “healthy” claim, the FDA will also “begin evaluating other label claims to determine how they might be modernized.”

The information and link for filing comments on the “healthy” definition are now on the FDA’s site.

Meanwhile, the FDA is still in the midst of the fraught process of trying to promulgate a clear definition of “natural.” The agency began taking comments in 2014, and had received about 7,600 by the time it closed the comment period on May 10 of this year.

At that time, the FDA told The New York Times that completing its review of the comments could take months. In the interim, food and beverage companies — which have been subject to a growing number of consumer suits over use of the “natural” claim — have become wont to instead use the “clean” descriptor for products and ingredients.