'Westworld' Boldly Goes Where Man And Movies Have Gone Before 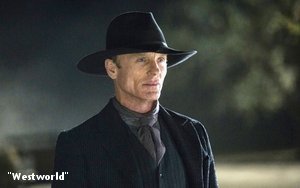 HBO’s “Westworld” is based on a cynical, ugly premise, that people with a lot of money -- men mostly -- will pay dearly to visit a simulated fantasy world where they’ll get to have sex indiscriminately and commit acts of violence with no repercussions. An ugly premise begets an equally unattractive TV show. While watching the first two episodes of “Westworld” the other day -- in advance of its premiere this weekend -- the word “valueless” occurred to me over and over again.

Of what value is this show? I asked myself. I came up with no answer other than the empty generality of “entertainment.” Even with that relatively low bar, this show achieves the level of entertainment only sporadically.

It’s a misfire, despite the high-minded questions it asks and the themes it suggests. Like a number of science fiction movies and TV shows that have come before it -- including the 1973 movie of the same name -- this new “Westworld” asks the by now age-old question: Are we advancing so quickly in the development of artificial intelligence that we are in danger of creating machines capable of acting independently of our control? Or more to the point: If they do obtain their independence, is it inevitable they will become hostile to us?

That’s usually the case in these fanciful tales of advanced robots running amok, but I will refrain from confirming that this is the outcome on this new “Westworld,” just in case anyone feels like watching it after reading this.

Reviving “Westworld” at this point in time makes a certain amount of sense, at least in terms of the technological moment we’re in. We’re on the cusp of making all sorts of experiences possible through virtual reality. And video games allow us to simulate the killing of lots of people, if that’s what we feel like doing.

The men whoop with excitement after mowing down a gaggle of realistic (but robotic) banditos, but you don’t get the sense they’re reaping any real joy from the great investment of time and money they have made to get here. If the original Disneyland theme park in Anaheim became known as “the happiest place on Earth,” Westworld seems like the opposite -- the unhappiest place.

Even the robotic “hosts” -- as the mechanical cyborgs who staff the park are called -- feel mysterious feelings of loss and longing, although they cannot articulate what these feelings are. They’re not supposed to be capable of having dreams or memories, but with recent updates to their software, they’re evolving into beings that aren’t quite human, but on their way there.

If this doesn’t fascinate you, then you must settle for the scenery, the periodic action scenes (the aforementioned massacres make up the majority of these) and the acting, some of which is stellar. “Westworld” boasts what used to be known as an “all-star cast,” including Anthony Hopkins and Jeffrey Wright as the cyborgs’ software engineers and life-givers, and Ed Harris (seen in the picture above) as a guest who is seeking something more than mere sex and gunplay in his latest visit to the park.

The show suffers from hack writing characterized by the use of the f-word in scene after scene where it doesn’t belong. The word doesn’t really add anything except puzzlement. It is applied most frequently in angry conversations between co-workers (real ones, not robots) -- behavior that in the real world would get people fired.

At one point during a sustained action scene, the music playing in the background is an orchestral version of the Rolling Stones’ “Paint It Black,” which has no bearing on what’s happening in the scene except that the villain is dressed in black. But since villains in Westerns have been dressed in black since the beginning of time, this choice of music would seem to serve no purpose.

At some point during the process of creating and developing this show, someone hatched the idea of naming the Hopkins character “Robert Ford,” which emerges as the only name in the show (that I could detect, anyway) lifted from Old West mythology. Robert Ford was the name of the man who shot Jesse James.

What this has to do with “Westworld” was not revealed in either of the first two episodes I watched. And Jesse James was nowhere to be seen.

tv
2 comments about "'Westworld' Boldly Goes Where Man And Movies Have Gone Before".
Check to receive email when comments are posted.
Read more comments >
Next story loading