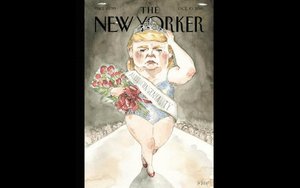 A picture may be worth a thousand words, but how many electoral votes will the one depicting Donald Trump as a beauty pageant contestant on the cover of next week’s The New Yorker be worth?

The cover, entitled (ironically) “Miss Congeniality,” is one of the magazine’s trademark takes on the biggest sound bite to come out of this week’s presidential debate.

Of all Trump’s dangerous beliefs, cover illustrator Barry Blitt said, his misogyny “might just be his Achilles’ heel.”

Which in this case, is depicted in high heels.