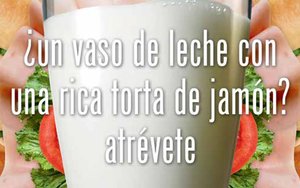 California Milk Processor Board (CMPB) is getting some hammy help in encouraging Hispanics to drink milk.

To commemorate the 45-year legacy of legendary Hispanic TV icon “El Chavo,” CMPB and Grupo Gallegos (California Milk’s Multicultural AOR for 11 years), teamed up with Televisa and Grupo Chespirito to develop the first regional campaign to feature this iconic character known for his love of ham sandwiches. Since the early 1970s, when created by comedian Roberto Gómez Bolaños (who died in 2014), El Chavo's popularity has grown beyond Mexico to all of Latin America, Spain and the U.S.

"El Chavo is near and dear to the hearts of every generation of Hispanics and people heavily engage with El Chavo," says John Gallegos, founder/CEO of Grupo Gallegos. "He has more than nine million Facebook fans. To further understand his scope and reach – the 2015 Super Bowl had 114 million viewers; El Chavo’s TV show reaches that same number of viewers every day."

As part of the campaign, Hispanic consumers in California can sample El Chavo’s iconic ham sandwich with milk, and take home a limited-edition El Chavo barrel cup with the purchase of milk. Additional in-store activations across California will invite consumers to take a photo inside El Chavo’s famous barrel in his neighborhood, which serves as the backdrop from the TV show.  The campaign had in-store presence in 100 independent grocery stores and 20 stores that held larger scale activations – radio remotes, samplings, an El Chavo immersion entertainment activation, and unique El Chavo barrel cup give-a-ways in 80 locations. The media buy was across California with a focus on Los Angeles, San Diego, Fresno, San Fransisco and Bakersfield.

Even those not in the region can participate in this campaign. Fans who share their photos with the hashtag #ElChavoyLeche have the chance to enter a social media sweepstakes to win El Chavo branded swag and a gift card.

The creative serves as an extension of the "Atrevete a probarlo" (Dare to Try It) campaign with this new version using similar elements but interjecting El Chavo and his essence: the tagline states “¿Un vaso de leche con una rica torta de jamón? Atrévete” (A glass of milk with a delicious ham sandwich? Dare to try it.) "With our campaign of 'Atrevete...' focused on unique food pairings with milk, we weren’t originally focused on non-food partnerships for brand activations," says Gallegos. " But a relationship with Televisa brought together discussions for El Chavo into consideration and we knew it was something we needed to do immediately because of how hugely successful El Chavo is."

"Everything was supported by digital efforts which also included an online sweepstakes, in partnership with Univision, that gave consumers the opportunity to win one of a kind El Chavo/Tome Leche back to school merchandise," says Gallegos. "A bittersweet side note: one of the activations was closed down by the police because of the massive size of crowd!”

In its first few weeks, the campaign has already garnered more than 9 million impressions for social/digital and 15 million for store activations.