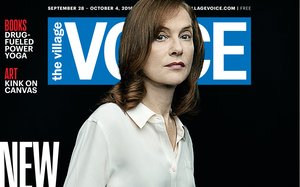 The Village Voice has launched its first Film Issue to coincide with the upcoming New York Film Festival, on the tails of its recently released Fashion Issue.

On average, each print issue of The Village Voice includes 10 pages dedicated specifically to film, she said.

The Village Voice plans to release a Film Issue annually around the time of The New York Film Festival.

The Film Issue will “unveil and preview the season’s finest films, most highly anticipated premieres and classic revivals" from NYFF, Gursoy said. T

he Film Issue will be given to attendees at all of the festival's screenings.

Available online and in print, this year’s Film Issue features Isabelle Huppert on the cover, who is the star of Mia Hansen-Løve’s "Things to Come" and Paul Verhoeven’s "Elle."

The Village Voice will be sponsoring premiere parties, screenings, after parties and a Q&A session for NYFF, which takes place Sept. 30 - October 16.

The weekly newspaper is diving into theme issues this year as it gears up for an “extensive relaunch” planned for 2017. The publication launched the Fashion Issue earlier this month to coincide with New York Fashion Week and released a dedicated Education Issue and Fall Arts Guide in its red boxes on Sept. 14 and 21.

Going forward, readers and advertisers of the Voice “can expect to see the build of staple columns and departments that will have a consistent presence post-relaunch,” Gursoy said.