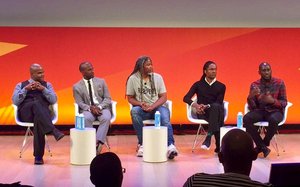 “Our objectives are as diverse as raising money for a foundation, helping pass legislation, bringing awareness to a cause or creating a peace-based technology in service of ending the cycle of violence and fear cased by racial bias and injustice," says Cartwright.

A text served as their call-to-action. Cartwright sent a message to his friends saying “We need to come together. And say something." The four men met that Saturday morning where they sat down together for the first time despite knowing each other for years.

They discussed their shared experiences growing up as black males, the racism encountered along the way and the opportunity they had as a group together to bring about change that was inclusive and impactful. This conversation then led to them launching Saturday Morning, the overarching umbrella that seeks to engage individuals from across America in creating inclusive solutions to address continued issues of racial inequality and reducing violence.

“The community spirit of cooperation and trust is broken,” says Edwards. “This is a call to action to find solutions through all forms of communication to impact these statistics.”

However, they made clear that they are not an agency that will solve the business problems of others. Its mission is specifically to bring solutions to its brief though all means. In addition to individuals, businesses and brands, It hopes to work closely with universities to make the Peace Brief a part of the curriculum of applicable fields of study that could include art and design, law, communications, engineering and others.

They plan on using their respective skills to launch The Peace Brief which will call on the industry and the general public to use their voices for positive change.

The group says it will share the Brief with artists, fashion designers, film makers, musicians, community organizers, writers, developers and those in creative fields who can create their own content that Saturday Morning will then curate and showcase across multiple channels.