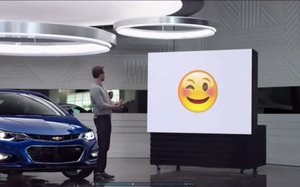 Despite an increase in sales incentives, U.S. auto sales took a slight dip in September, but the tally was not as bad as what had been projected by analysts. September total vehicle sales declined 0.5% to 1.44 million units, according to Autodata Corp.

“While growth appears to be stabilizing, the market remains a healthy environment for profitable sales,” says Stephanie Brinley, senior analyst, IHS Markit. “Car sales continue to struggle, though newer products are rewarded with better performance. While SUV sales continue to grow overall, we can also see where newer entries are outperforming older models. In a competitive environment, product remains the first tool for increasing demand.”

There were bright spots, such as the Chevrolet Cruze (pictured left).

“GM continues to exercise discipline with its retail and fleet sales mix,” says Akshay Anand, an analyst for Kelley Blue Book. “Perhaps more promisingly, cars such as the Cruze and Malibu are up in a time where much of the industry is trying to figure out how to stop car sales from plummeting.”

“You know it is an ugly month when Ford’s headline is about strong Transit van sales,” says Michelle Krebs, senior analyst for Autotrader. “Indeed, September marked another bad month for Ford. Some is due to Ford significantly lowering fleet sales, which were exceptionally high early in the year. Ford has negative signs in almost every category, with hefty double-digit declines for every car in the company’s line -- except the new Lincoln Continental. Indeed, the brightest spots in Ford’s September sales report are its commercial vehicles, like the Transit, and its new Super Duty truck.”

“Shopping activity on dealership websites was down from August to September, an indication of continued industry softening,” says James Grace, director of analytics product management for Dealer.com. “SUV and truck shopping was flat, with other segments, most especially sedans, down.”

Automotive paid search costs are up 2.6% month-over-month in September, according to Dealer.com.

“We typically see a seasonal increase in advertising starting in September as dealers and manufacturers work to move inventory ahead of new arrivals and meet yearly sales goals,” Grace says. “This year’s 2.6% increase in September is substantially less than last year’s 6.5% increase, though.  The combination of softening sales and a buyer’s market for digital advertising may lead to increased investments by both manufacturers and dealers between now and the end of the year.”