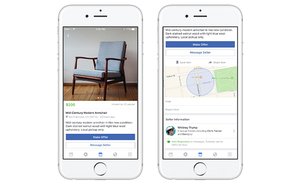 While the social behemoth didn't tout search or ecommerce capabilities to support its new ecommerce tab, no one can deny that the ability to search and find products with as few queries as possible remains the top requirement for a great experience in an online ecommerce marketplace.

Facebook's feature, announced Monday, aims to compete with the likes of Craigslist, Amazon, Estsy and others that allow consumers to sell and buy new and used goods online. But a site like Marketplace cannot be complete without a way to close the transactions, which according to Mary Ku, director of product management, Marketplace doesn't offer.

Marketplace, enhanced for a mobile experience, appears to have basic functionality -- including product descriptions, images, and category listings -- and is similar to classified ads. Users must be 18 years or older to use the platform, which will roll out in U.S., UK, Australia, and New Zealand.

While early testing included payment integration with Stripe -- which according to Colin Sebastian, senior research analyst at Baird Equity Research, could change everything -- the Facebook post announcing Marketplace instructs users to direct-message the seller to make an offer on the price of the goods.

Facebook does not facilitate the payment or delivery of items in Marketplace, Ku wrote in the post.

Sebastian wrote that while Marketplace did facilitate the transaction in early tests, it did not charge a transaction fee. In my opinion, facilitating the transaction and charging a fee would move the service beyond Craigslist to provide a complete end-to-end platform similar to Amazon and eBay, but it would also in the future provide Facebook with another revenue stream.

The transaction is part of the service and makes Facebook Marketplace different. Members on the site have been setting up local marketplaces for years to buy and sell local new handmade and used goods. Take Misty's List, for example, a community on Facebook that provides locals with a way to communicate about goods for sale, from cabins to cars and shoes to dishes.

"We believe that Facebook is experimenting with a variety of additional e-commerce-related applications, and could eventually launch product views/shopping within the Oculus platform," he wrote, calling Marketplace a "positive" influence for service providers such as Shopify, Big Commerce, and ChannelAdvisor, which help to power merchant sales.

While Sebastian believes the impact of Marketplace on Amazon and eBay will likely be limited in the near future, Facebook's move lays the foundation for more ambitious ecommerce plans.

"Combined with Messenger, Facebook is well positioned, in our view, to take a bite out of the e-commerce Marketplace market, and in turn, boost revenues from the lucrative retail/e-commerce market," he wrote in a research note published Monday. "While Facebook has been testing a version of marketplace functionality, and has a light classifieds tool live in Australia, today's announcement is clearly a more concrete step towards competing in the market dominated by Amazon and eBay, and to a lesser extent by companies such as walmart.com, Jet and Rakuten."