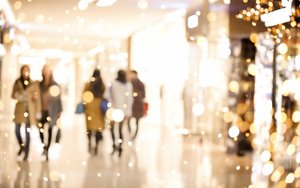 With growing paychecks and more confidence in a healthier economy, Americans are expected to dial their holiday spending up 3.6% to $655.8 billion this year, well above the 2.5% average gain in the past 10 years.

The International Council of Shopping Centers also released its predictions, calling for a spending gain of 3.3%. On a per-person basis, that works out to an average of $683.90 this year. And Last month, Deloitte, the retail consultancy, released its forecast, calling for spending gains of between 3.6 and 4%.

And it’s even better than the 3.4% annual gain averaged in the seven years since the economic recovery began, according to the new forecast from the National Retail Federation. The NRF predicts even bigger gains — between 7% and 10% — in non-store sales, to $117 billion. (Some 90% of those transactions are e-commerce.)

Last month, Deloitte, the retail consultancy, released its forecast, calling for spending gains of between 3.6 and 4%.

“People have more money in their pocket and an expanded use of credit,” NRF Chief Economist Jack Kleinhenz says, in a conference call discussing the predictions. “But they haven’t over-leveraged themselves, which leaves them the ability to use a little more credit if necessary.”

And despite the current political environment, including the sentiment among one group of supporters that Americans are suffering and the economy is sputtering, the Washington D.C.-based trade group finds consumer sentiment is upbeat, and it doesn’t predict politics to cut into holiday presents.
Execs, though, are likely fretting about the election, “with one outcome in some ways more predictable, and the other a wild card of unknowns keeping business leaders up at night,” says CEO Matthew Shay in the call. “But the strength and resilience of the consumer is not.”

In recent years, strong consumer spending hasn’t always translated into gains for retail’s biggest players, with many people more attracted to “experience” gifts, such as travel or event tickets. And there’s been a considerable shift to smaller, more niche stores. Shay acknowledges the changes, “but the opportunity for retailers to create those experiences, with very personalized and customized interactions, means they can compete.”