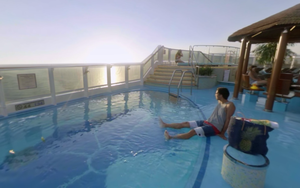 Carnival Cruise Line is launching a 360 video campaign to promote the features of its new Carnival Vista.

In a highly saturated cruising market where it seems like a new ship is unveiled every other week, Carnival was looking for a way to highlight its new ship that sets it apart from the rest using a playful, modern approach.

Within the videos, King takes viewers on a tour of the ship, showing some of the features, such as  SkyRide, an 800-foot long dual-track aerial ride suspended 150 feet in the air, and Kaleid-O-Slide, a 455-foot water tube in the WaterWorks park. The videos were shot aboard the Vista as it toured the Mediterranean Sea and made seven stops across Greece, Italy and Malta.

There are certain life experiences you simply can’t appreciate unless you’re actually there, says Jim Elliott, global chief creative officer at Arnold Worldwide. Being aboard a Carnival ship in the middle of the ocean, surrounded by open water, blue sky and a seemingly endless variety of totally original, laughter-inducing activities is one of them.

“So in that respect, applying 360 technology to the launch of the Carnival Vista is a complete no-brainer,” Elliott says. “It’s allowing us to tell the Carnival story in totally new and immersive ways. With this series, we’ve really only begun to scratch the surface of what’s possible with VR. But for the moment, there’s really no better way to experience the magnificence of Carnival Vista without climbing aboard the real thing."