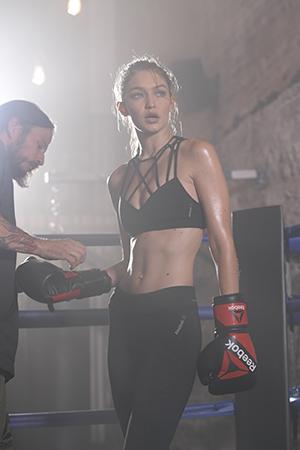 Reebok, which launched a controversial “Perfect Never” campaign with the chastened UFC fighter Ronda Rousey earlier this year, is adding supermodel Gigi Hadid to its lineup.

In creative that it promises will help the world see a different side of the 21-year-old social media phenom, Reebok says ads will show how hard work and sweat help her be true to herself. The campaign, from Venables Bell, is part of the brand’s larger “Be More Human” effort, and the company says it will focus not just on how Hadid uses fitness to “escape the noises in my head,” but how all women can occasionally flee from the negativity that often surrounds them.

“We know there is that expectation that women are supposed to be perfect, and that standards may be unfairly high,” Yan Martin, VP/global brand communications for Reebok, tells Marketing Daily. “And women put pressure on themselves. We need to talk about things in a way that’s more real.”

With almost 24 million Instagram followers, the 21-year-old model bears a strong resemblance to mom Yolanda Hadid, former model and star of The Real Housewives of Beverly Hills. And she has made an even bigger name for herself by standing up to modeling agencies and Internet trolls who think she should lose weight.

Social media continues to be a big part of Reebok’s strategy, Martin says. “Social media will let us tell Hadid’s story, like Rousey’s, in a very rich, deep way that resonates with people and inspires them,” he says. “She’s not just a fashion model. She’s a role model.”

Social media “is a gateway for us,” he says. “We have people in-house answering every tweet and every post. It’s part of what we do as a brand, part of our authenticity.”

And while the women’s workout gear category has been flooded with stellar advertising in the last year, including woman-wooing work from Nike and Under Armour, “what sets us apart is that we’ve been a fitness brand for women since the 1980s. Other brands are focused on team sports, and while they’re jumping on the fitness trend now, we are — and always have been — committed to it for the long run.”

In its most recent quarterly results, Adidas, which owns the brand, says Reebok’s revenues grew 7%, with double-digit gains in Europe, China, Russia and Japan.