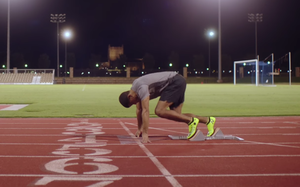 Famous athletes may dominate most sneaker ads, but New Balance is going in a different direction in its latest campaign, highlighting inspiring stories of young athletes you've never heard of.

Themed #GreaterThanTheWin, the new marketing push includes videos of people who have had to push past big-league obstacles to pursue their sport. There’s a homeless teen turned track star, a 5’1” painter pursuing boxing, and for its global audiences, and a dedicated cricketer who found much-needed inspiration from his dad.

New Balance, which is based in Boston, started its search for inspirational stories back in June, and says that in its selection, it’s chosen a group meant to convey the importance of perseverance: “The '#GreaterThanTheWin' film series tells the unique and inspiring stories of athletes intent on carving their own path, whom we admired and think reflect the values of New Balance.”

The campaign, created in partnership with Tongal, the crowdsourcing studio, is running in a paid YouTube push, as well as on the brand’s social media channels.

The privately held New Balance, while a small brand compared to giants like Nike, Under Armour and Adidas in the $17.2 billion U.S. athletic shoe markets, has long been a favorite among serious runners. And its visibility is gaining as it phases into its sponsorship with the New York Road Runners Club. This year, it’s the official footwear and apparel sponsor of the Airbnb Brooklyn Half, and the title sponsor of the New Balance Bronx 10-Mile and the New Balance 5th Avenue Mile. Next year, it becomes the official footwear and apparel sponsor of the entire NYRR, including the TCS New York City Marathon.

Separately, Women’s Wear Daily reports that the company is taking the wraps off New Balance X J. Crew, a line of activewear for women. The collection, which will be available on both sites, is the first clothing collaboration between the two. (J. Crew has been partnering with New Balance for shoes for over a decade.) WWD says it’s expected to expand into men’s next spring.