Wozniak Ponders Why Jobs Acted Like He Did, Why He Disowned His Family 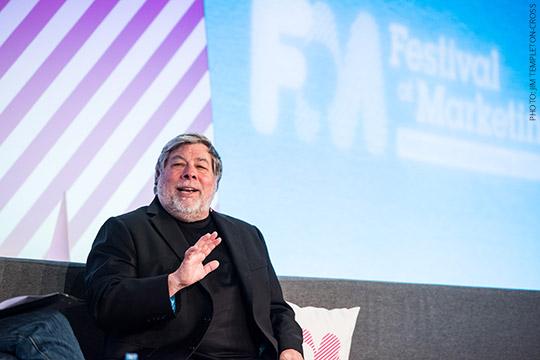 LONDON -- An emotional Steve Wozniak paid tribute to Steve Jobs on the fifth anniversary of his death at the Festival of Marketing here today.

Prompted by a question from delegates, Wozniak spoke fondly, but realistically, about the Apple co-founder.

“I was thinking of Steve a lot this morning,” he said.

“He did have a lot of flaws and I would sometimes wonder how could a human being do these things, some things you will never know about. I’d wonder if you only think about yourself, how can you live like that. But the truth is, he was always acting for us both -- everything he did was for us, more than it was ever about the money.”

Wozniak explained that their relationship was based on him putting everything into his computer designs and Steve Jobs making money for them both. To understand Steve Jobs, you have to remember how the pressure of wanting to be a major entrepreneur changed the man.

“There were two Steve Jobs,” Wozniak explained. “There was Steve Jobs when we were playing around making computers in the early days. We’d play tricks on each other and laugh all the time. But he wanted to be a somebody and so when we became a big company he became very serious. He wanted to be a businessman and wanted to learn how to be that person. He’d still laugh sometimes afterwards but he generally was different.”

Probed further about what he would say if he could talk to Steve Jobs today, Wozniak pointed out that he was thankful for having been able to talk fully to Jobs on his deathbed to let him know how much he had meant to him. However, he admitted if he were to talk to him today about the latter days, they would just end up having a row, so he would go back to a question that has always vexed him.

“Why did you turn your back on your family, why did you never respect them?” Wozniak would ask. “He was adopted and so I think maybe he didn’t see them as his family. His sister once called to get a discount on a computer and Steve wouldn’t give it to her, not even a staff employee discount. I told him he should, it’s his sister, but he just wouldn’t. I’d love to know why he just didn’t seem to see his family as his family. I’ve never understood it.”

As for what Wozniak has left to do, the answer was simply. A visit to Bucharest is on the bucket list as is a dream of hitting a 700,000 high score on the computer game Tetris, the music to which welcomed him on to the Festival of Marketing stage in London.