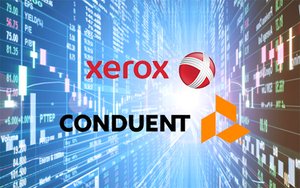 Building a brand is never easy, and it can be even harder when trying to separate oneself from a household name like Xerox.

As Xerox looks to break itself into two companies — Xerox Corp, which will handle document management and technology, and Conduent, a business process outsourcing unit serving large companies and governments — the latter has a distinct challenge ahead of it.

“[Brand building] doesn’t happen overnight,” John Kennedy, Conduent’s chief marketing officer, tells Marketing Daily. “It took 100 years to build a brand as recognizable as Xerox. We want to build something that’s as substantial as that.”

Conduent took its first steps along that path, unveiling its new brand identity. The logo — which uses three orange parallelograms surrounding a negative-space triangle, along with the company’s name in bold, black font (and connected N and T at the end) — is intended to convey strength, motion and innovation, Kennedy says. “We’re using Conduent as a [representation] for what the company is and what it does,” he says.

The company put a lot of thought into the logo’s elements, particularly its orange color, which is relatively unique in the global business services category (“It’s a territory that’s not as crowded, and we want to stand out,” Kennedy says), and its connected parallelograms, which are intended to represent the three stakeholders of the company: clients, employees and investors.

The parallelograms are also meant to evoke motion, while the connected “N” and “T” in the company name signify “stability, trust and continuity,” Kennedy says. “A lot of what we do involves things flowing and moving in a certain way,” he says. “Our portfolio is diverse. We’re involved in a lot of different aspects [of business and government management]. Our brand identity becomes a jumping-off point to other ways we can help our clients.”

In the end, of course, few people purchase a product based simply on its logo (and even fewer do so in a business-to-business space). As Conduent goes about establishing itself as a separate company from Xerox, it will have to do so on its own merits, Kennedy says.

“Brands are built through great experiences that clients and customers have and how that experience communicates itself,” Kennedy says. “Conduent aspires to be a company that is known for the ways business and governments interact with their constituents [and customers].”