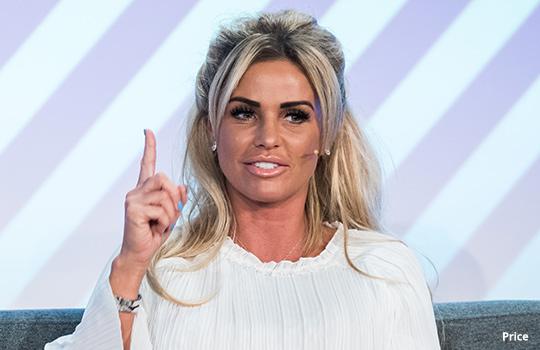 Speaking at the Festival of Marketing in London yesterday evening, Price was asked whether she thinks Kim Kardashian was foolish to post pictures of her "bling" while revealing that she was in Paris. While not addressing Kim directly, Price responded with a swipe at celebrities who post pictures of their wealth on social media. "It's just so cringey, there's no need to do it," she said. "I post a lot of pictures on social media but it's generally me and the five kids at home. The difference is, if you've got money, I don't feel you need to show it. It's like people who post pictures of themselves driving with the sleeve rolled up so you can see they're wearing a Rolex. For all we know it's a fake. I don't do any of that, why would i need to?"

Katie Price was also at pains to point out that unlike the Kardashians, she has achieved famed despite Instagram not being around twenty-three years ago. She even shared a story of Kim admitting to being a huge fan of hers, going so far as to once tweet she was excited to even be on the same plane as Katie Price.

American readers -- and for others not so sure of who Katie Price is -- let me explain. She's like a British Kardashian. Was that too trite? OK -- well, she started out as a topless model in The Sun newspaper twenty-three years ago. She then pretty much lived her life through the papers, remember there was no Facebook back then. After some high-profile dating that left her with a son from a famous Manchester United footballer Dwight Yorke, she married Australian singer Peter Andre, whom she met in a jungle on a reality television series. Next up in the husband stakes was a cross-dressing cage fighter -- I kid you not -- followed by her current husband, a former part-time stripper. In between there have been an attempt to become an MP, lots of reality tv shows, several "boob" jobs, a pretty embarrassing attempt at winning the Eurovision Song Contest and a string of books that have been ghosted for her.

Admitting that she was envious of the amount of money the Kardashians can earn through the much larger market of America, the rest of her panel discussion was actually pretty fascinating. How so? Well, she has managed to do what many celebrities and marketers have failed to do, she's remained at the top of her game through two co-running brands. Jordan, the wild model, was loved by men, hated by women. Now as Katie Price, she jokes, she is loved by women, and the men have to be dragged along to a book signing or launch. Jordan is apparently still there, but usually only comes out when she'd had a drink, she joked with delegates.

With many, myself included, wondering what she was doing at a marketing show, we soon got our answer. While it must be said that she came over as a very confident, shrewd businesswoman, she did take several opportunities to drop hints to the assembled marketers to get in contact so they could create new lines together and make her a lot more money. The joke afterwards among delegates was that the household name just might be in it for the money.

And what kind of projects did she have in mind? Well, she has always thought she would be right to build a line of baby products, but her burning passion is for something altogether more apt, given her previous line of work and public interviews about multiple breast augmentations. "I want to make pretty bras for girls with big boobs," she declared. "Why do fashion brands thing big-busted women want to wear ugly bras?"

Sean Hargrave is MediaPost's London Editor. You can reach him at seanhargrave@btinternet.com.