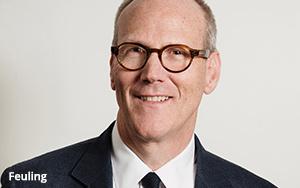 Bloomberg Media is expanding its marketing services capabilities with the hire of Steven Feuling.

He will oversee and grow a team that will help B2B advertisers create marketing strategies and content for Bloomberg Media’s properties and other outlets.

Feuling, who was most recently U.S. CEO of the Dentsu Aegis agency Vizeum, will take on the role of global head of marketing services on October 10.

"The role that a publisher -- especially one founded in data and technology -- can play in helping a brand authentically connect through storytelling is growing exponentially. We are doubling down with the best strategic, analytic and creative talent to help brands meet their business outcomes," stated Bloomberg Media COO Jacki Kelley.

Kelley added that she and Feuling had worked together previously at Yahoo.

The appointment is an effort by Bloomberg Media to build out its content studios and marketing services to diversify its revenue streams beyond its existing outlets.

The effort is also being led by CEO Justin Smith and Kelley, who have helped Bloomberg Media’s global advertising revenue grow more than 8% year-to-date through the end of September, compared to the same time period last year. Custom content revenue has grown more than 70% year-over-year, according to the company.

“Bloomberg Media is moving forward with several new global initiatives with the potential for high growth. Marketing services is high on that list," stated Smith.