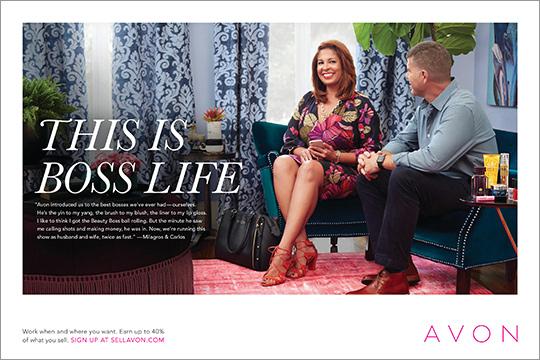 New Avon is seeking new recruits as the beauty brand launches the "This is Boss Life" campaign to celebrate the "flexibility, freedom and financial opportunity" of becoming an Avon Representative.

"As a 130-year-old, $1 billion start-up, we are innovating fresh new launches across the business to redefine our iconic American brand," says Matt Harker, VP, marketing, Avon.

"The campaign is driven by this insight and delivers the message that 'nothing is more beautiful than succeeding on your own terms,'" says Harker.

The music video-style TV commercial is set to the well-known female anthem, “I Will Survive” with re-imagined lyrics including “I should have done this years ago/I should have broken free/If I’d known for just one second I could be the boss of me” and “Oh as long as I’ve got Avon and the newest shade of gloss/I’ve got passion, can’t you see?/‘Cause my future’s up to me/Yeah, I’m a Boss.”

The print ads showcase select Avon Representatives to inspire new recruits through their real-life stories of success. "It was important to choose Representatives with stories that would be relatable across a wide range of women, and even men, too," says Harker.

These ads will be seen in the December and November issues of Better Homes & Gardens, Redbook, Parents and People magazine, as well as across Spanish titles, Vanidades and Siempre Mujer.

Social media activation is core to the initiative. The Boss message appears via custom social media filters, YouTube videos, on Instagram, as well as across programmatic display to extend reach.

"Avon was the original social network, and the power of Avon has always been tapping into women’s social circles – so we’ll also be giving our Representatives the tools they need to amplify within their networks," says Harker. The initiative kicked off with a Facebook event hosted by Betty Palm, president, social selling, New Avon on October 6.

Word of mouth is key to the initiative's success. "With any campaign, the challenge is always ensuring strong reach," says Harker. "However, our social selling channel provides a competitive advantage. Our thousands and thousands of Representatives are our advantage – they are incredible brand ambassadors and spread the message broadly within their networks."