Is That Space Legal? Agencies Park Jeep On Side Of Times Square Building 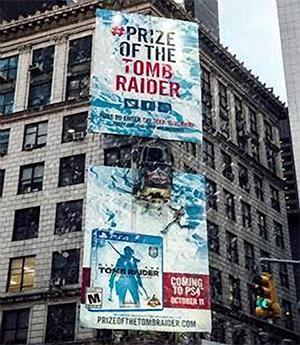 To draw attention to the PS4 release of “Rise Of The Tomb Raider,” game maker Square Enix wanted a promotion that would stand out with a lot of impact. The Jeep Wrangler the firm’s agencies have hung on the side of a building in New York’s Times Square is designed to provide just that.

The Jeep is part of giant 3D billboard that was created by Liquid Advertising and Out Of Home America Wilkins Media to promote the Oct. 11 game release as well as a related sweepstakes with a grand prize of—you guessed it—a Jeep Wrangler.

The billboard also “snows” on people in the vicinity, designed as a reminder to people of the harsh weather conditions that the character Lara Croft faces during the game.

“We’re all huge Tomb Raider fans at Liquid, so when Square Enix wanted to put together a giveaway to support the big PS4 launch, we knew we had to create a big, vertigo-inducing outdoor scene to show off the prize Jeep,” stated Liquid Advertising’s Patrick Runco. “And it was a chance for us to have a little fun with the New York location, in that the Jeep is in a parking spot that maybe only Lara Croft could possibly get.”

The timing of the placement also aligns with New York Comic-Con which takes place at the Jacob Javits Center in Manhattan Oct. 6-9. The billboard will be in Times Square through Oct. 30.