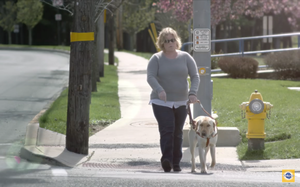 Pedigree is promoting a video it created of a blind woman and her assistance dog in support of Blindness Awareness Month.

When Liz Oleksa saw her son off to school, she didn’t know it would be the last time she would see his face — her eyesight deteriorated later that day, and she almost gave up hope. When a dog entered her life, everything turned from dark to light.

Oleksa’s emotional story is shared in a new video titled “Dark to Light.” The video, created by BBDO, tells a visual story featuring Oleksa, a single mother, and her journey from darkness to light with the help of her new guide dog, Brice.

The video was also created in a second format that uses descriptive video services (DVS) to voice over the visuals displayed on the screen, ensuring the visually impaired can experience the film as well.

The story is the latest installment in the Pedigree’s global “Feed the Good” campaign, which is based on the simple insight that dogs and people benefit each other. Since the campaign launched in 2015, the brand has been sharing the stories of dogs and humans helping each other and sparking conversation about the positive effect dogs have on people. A previous video showcased a wounded veteran, Dan Lasko and his service dog, Wally.

"The ‘Feed the Good’ campaign brings to life the Pedigree brand's commitment to making the world a better place for dogs," said Melodie Bolin, Pedigree brand manager at Mars Petcare, in a release. "Through visual storytelling, we have been able to share the heartwarming tales of remarkable dogs and individuals, and the positive impact they've had on each other.”