Activision Uses Kids To Sell To Kids In 'Skylanders' Campaign 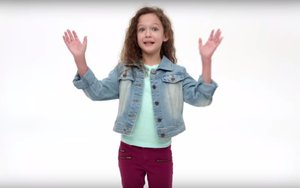 Activision and its agency 72andSunny are supporting the new Skylanders Imaginators game by featuring real children in the advertisements.

"The first line in our casting spec was 'We want kids with wild imaginations,'" says Travis Cross, senior brand manager, 72andSunny. "And that’s who we set out to find. We partnered with a casting agency specializing in working with children to help find kids that were the most talkative, sure of themselves, and loved to create."

To create the campaign, the agency gave kids an advance look at the game, which allows kids to make their own characters, by capturing what kids would develop on their own. "We wanted to find kids who didn’t just come up with a character, but came up with its backstory, it’s allergies, it’s family history," says Cross.

While the broadcast films show the internal creative process in making a character, the social films flip the camera, and showcase the kids explaining the inspiration and personality traits of their Imaginators. "We wanted kids to run wild and encouraged them to tell us all about their character in casting then picked our favorites for filming," he says.

One of the social films, for example, focuses on Brooke, who explains how her character “Felicia” has strong bird legs and a cupcake hat that keeps her going to the hair salon to get more sprinkles for her balding head.

"Many of our kids wanted to think about their character and tell us about them, not create on the fly, so we worked with them to take their internal monologue and verbalize it which lead to Benji’s “put it on his head and eat, Steak Head!” and Hudson’s beloved “five-year-old garbage” line that had us cracking up in the back room."

Spots will be running digitally on all of Activision's owned channels as well as on broadcast through the holidays on Nickelodeon, Disney, and Cartoon Network. There is also a partnership program that extends the game through the new Netflix Original, Skylanders Academy.

The $3 billion Skylanders franchise has sold through more than 250 million toys since debuting in 2011.