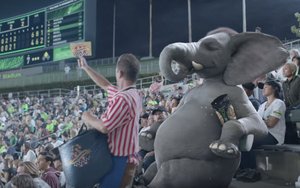 In the latest versions of its popular “Get Crackin’” ads, Wonderful Pistachios is foregoing celebrity faces in favor of a computer-generated elephant voiced by WWE star John Cena.

The brand said that in response to a bumper crop of pistachios this season, it’s cutting its prices by 25% and investing $55 million in a particularly aggressive push designed to drive high sales volume and expand its customer base.

The campaign is kicking off with two TV spots featuring “Ernie the Elephant” promoting pistachios as a healthy snack. The spots will debut tonight on programs including “Monday Night Football,” “Dancing with the Stars” and “The Late Show with Stephen Colbert.” (Colbert had been the brand’s dominant celebrity rep since his first appearance in a 2014 “Get Crackin’” Super Bowl spot.)

In one of the new ads (above), Ernie dismisses a peanut vendor during a baseball game: “I used to eat peanuts…I also used to wear diapers.”

In another (below), he talks up pistachios in an elevator while setting off weight sensors, causing fellow office-building denizens to flee for another car.

In eight more TV ads to be released in coming months, the pachyderm will take on supermarket shopping, working out and airports, among other scenarios, according to the brand.

Sherman will also star in a series of “Snack Smarter” videos for digital media, touting the nutritional advantages of pistachios over other salty snacks.

The new creative was developed by Wonderful Agency, the in-house creative team for parent The Wonderful Company, whose products also include Wonderful Almonds, Pom Wonderful, Wonderful Halos and Fiji Water.

The elephant character was animated by Moving Picture Company (MPC), the Academy Award-winning studio behind Disney’s “The Jungle Book.”

Other campaign elements include print and outdoor advertising, a “large-scale” digital and social media campaign, in-store POS, and public relations.

Wonderful Pistachios will also use Ernie in a soon-to-be-announced elephant conservation cause-marketing effort, according to the company.