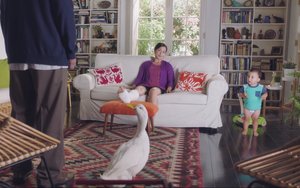 Aflac is launching a campaign intended to educate Spanish-speaking consumers about how Aflac helps protect their pockets during unplanned medical events.

The campaign includes a TV ad called "Help," which will air nationally on major Spanish-language networks through late November. It is the company's second commercial designed specifically for the Hispanic market without an English-language version.

"Research indicates a need to provide better education within the Hispanic community about the value of voluntary insurance products," said Gail Galuppo, senior vice president and chief marketing officer at Aflac, in a release. "We want to share information with Hispanic-Americans in culturally sensitive ways, in their preferred language, so that families can better protect their pockets from the financial challenges of an unexpected illness or injury."

The campaign debuted Oct. 6 on Telemundo during the Latin American Music Awards. The Aflac Duck played a pivotal role during the awards show, as he was the "official protector" of the envelopes holding the names of the winners of the night. After walking down the purple carpet, the duck worked tirelessly to assure the audience that the awards were kept safe throughout the night. Viewers can see highlights of the evening on social media (@AflacDuck) or visit Aflac's exclusive "Winners of the Night" section on telemundo.com.

"Help" opens with a woman, who has her leg wrapped in a cast, reviewing medical bills. Her father enters and asks how she is doing. The daughter expresses her surprise about the fact that her major medical insurance isn't covering all of her expenses. However, because she has Aflac, she received the supplemental money for medical bills in one day, which means she doesn't have to touch her savings or the grocery money. The Aflac Duck pushes two full bags of groceries into the room to prove that the grocery money went to its intended use. The father is pleased but must ask, "if not with money, how else can I help?"

The daughter looks over to her child, who has been playing offscreen, and suggests, "you could change your first diaper." He looks bewildered by this task and looks down at the Aflac Duck for assistance. The duck slowly steps backwards out of the room, leaving a trail of duckprints in spilled baby powder.

The 30-second ad is intended to highlight that “Aflac te ayuda a proteger tu bolsillo" ("Aflac helps you protect your pocket") from the financial challenges of an unexpected illness or injury.

Aflac worked with Conill Advertising, Saatchi's U.S. Hispanic agency, on the campaign. In addition to the television commercial, the campaign will include local radio advertising in select markets, digital advertising, social media and online videos.