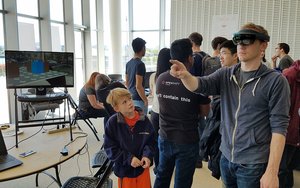 As brands start to explore the potentials of augmented and virtual reality, some agencies are diving into what’s happening at the ground level.

This past weekend, more than 300 participants from various industries teamed up to create 75 VR, AR and MR (mixed reality) applications at the Reality, Virtually Hackathon at the MIT Media Lab in Cambridge, MA.

The Hackathon was organized by local AR/VR groups, MIT, Harvard, and was supported by a list of sponsors including major players in the AR, VR and MR spaces, as well as two agencies.

“There is so much creative innovation happening in, and around Boston,” Steve Callan, vice president and director of creative technology at Hill Holliday, told the IoT Daily.

“With so many incredible minds pushing the boundaries of technology it is important to us to support the development community that is driving the future of these new platforms.”

Hill Holliday managed the creative marketing for the event, including branding, promotion and video content.

Isobar, which is a member of the MIT Media Lab, also sponsored the event and contributed immersive VR expertise from its NowLabs and sat on the judging panel.

“We really feel strongly about supporting innovation and events like this that bring great people together to experiment, learn, try new things and push the limits of digital experiences,” Dave Meeker, vice president of Isobar U.S., told the IoT Daily.

“That’s what we do every day, so supporting academics, startups and others in that just makes sense.”

The goal of the Hackathon was to explore potential new use cases for the different realities within various markets. Some areas of focus were entertainment, education, social virtual reality and healthcare.

Teams were created at the event and most participants had never met. Technical backgrounds varied from VR specialists to participants who had never used any of the equipment.

“Events like hackathons are equally important as the companies creating the hardware and software used at them,” Max McClaskie, creative technologist at Hill Holliday, told the Daily.

“These weekend long sprints allow unexplored ideas to be prototyped and really can give insight as to what’s possible with a medium like VR or AR.”

The event kicked off with a series of workshops to teach participants about creating projects for the different platforms. Projects were conceived, designed and developed through the weekend and then judged on Monday, along with an expo open for the public to try the experiences.

“I think one of the best parts of the event was to see how people are thinking about interaction with one’s physical environment and ‘things’ inside it while still inside a VR experience,” Isobar’s Meeker told the Daily.

“Leveraging different types of physical controllers and additional ways of doing user input through sensors and cameras is pretty cool and I believe gives a nod to the future and where things are headed.”

Intended to be used as an educational platform for young children, TreeHouse includes typical learning activities that children would use in the physical world, like stacking building blocks. However, parents can also remotely enter the virtual world, through desktop, mobile or any head-mounted display, and interact with their child. KidCity VR also created a virtual app store for parents to purchase additional interactive virtual objects for their children.

On the augmented reality and mixed reality side, WaypointRX won the Best AR Hack, as well as Best Non-Gaming App. WaypointRX delivers medical information, instruction and navigation to correct medications in a heads-up display on top of what the user is seeing in real life, through the use of Microsoft HoloLens. The intention is to augment medical staff in hospitals with pharmacist-level assistance to reduce errors, according to the team.

Vream Team won the Audience Prize and placed second for Best Entertainment Hack with their synesthesia-inspired visual music composition experience, which enables users to draw lines through space that correlate to instruments, pitches and tempos. Users move the controllers up and down to change the pitch of notes and the lateral speed determines the tempo of the track, which loops as more notes and instruments are added to the composition. The colors of the lines correlate to the pitch of the note.

“I think what’s great for agencies to note is that prototypes and proof of concepts can be built over a weekend,” Hill Holliday’s McClaskie said.

“Since VR is such a new medium that best way to demonstrate it to someone like a client is by showing them first hand.”

“After spending the weekend around the participants and hearing their idea vs. actually experiencing it, it was so much more impactful and made way more sense,” he said.

“I think VR is not quite at the point where clients can visualize what agencies want to create via a deck or a flat comp and need to experience something, either an MVP of the idea or a demo that is similar and the parallels can be voiced over.”

Isobar’s Dave Meeker said that, although the event may not directly impact agency work, it is a positive sign for the platforms altogether.

“If anything, it helps solidify the fact that ‘this is actually happening’ and the work that teams produced really demonstrates the art of the possible,” Meeker said.

“Hopefully this inspires brands and agencies and more and more companies start to bring VR and AR experiences to consumers.”