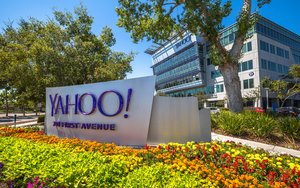 Yahoo’s terrible, horrible, no good, very bad month just keeps getting worse -- and in this case the company can only blame itself.

As first reported by the Associated Press, Yahoo disabled automatic email forwarding at the beginning of October. Users who had previously set up forwarding parameters in their emails are unaffected, but anyone who wants to set up automatic forwarding is met with a notice that the feature is “under development.”

“Automatic forwarding sends a copy of incoming messages from one account to another,” reads the message in Yahoo’s help center. “This feature is under development. While we work to improve it, we've temporarily disabled the ability to turn on Mail Forwarding for new forwarding addresses. If you've already enabled Mail Forwarding in the past, your email will continue to forward to the address you previously configured.”

Automatic forwarding is commonly used when email users switch from one account/email service to another. For example, if a Yahoo email user decided to switch their personal email account to Gmail, they would likely set up a forwarding system so that all of their Yahoo emails reached their new inbox.

Perhaps it is for this very reason that Yahoo has disabled email forwarding -- to deter Yahoo Mail users from jumping ship to rival services.

Yahoo’s downward turn in global consciousness may have been a long time coming, but it has been hastened in recent weeks by a disturbingly large security breach and news that Yahoo aided in email snooping for the United States’ National Security Agency.

Reuters first reported last week that since 2015, Yahoo has scanned all incoming Yahoo Mail messages for a host of keywords and phrases on behalf of the U.S. government.

At the end of September it was also revealed that a 2014 hack resulted in the theft of half a billion Yahoo email accounts, including email addresses, telephone numbers, birthdays, hashed passwords and security questions and answers. Yahoo is now fighting a class-action lawsuit accusing the technology company of security negligence and failing to take care of sensitive information.

Yahoo’s security concerns have grown so large that the New York Post reports that Verizon, which agreed to acquire Yahoo for $4.8 billion in July, is now asking Yahoo for a $1 billion discount.