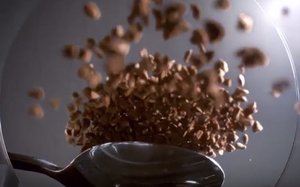 While the instant coffee category is growing in developing countries, it continues to struggle in developed markets.

The sensational success of pod machines that enable making fresh single-serve coffee — on top of today’s more-intense-than-ever coffee culture — has exacerbated instant’s troubles. In fact, the category’s sales are forecast to decline in North America.

Even Via Ready Brew, which hit $100 million in global sales within 10 months of its launch in 2009, according to Starbucks, has seen its U.S. sales erode more or less steadily since 2012, reports Euromonitor International.

Still, with $10 billion in sales over North America and other major developed regions at stake, instant coffee brands are “fighting back,” says the research firm.

That’s certainly true for Nescafé Taster’s Choice. With Nestlé consumer research showing 40% of consumers saying that they’re drinking less coffee because it’s too expensive to buy outside the home, the high-end instant brand is launching its first integrated campaign in many years. Objective: persuade consumers (including budget-minded Millennials) that the right instant can produce a tasty, easy and comparatively inexpensive cuppa right at home.

As coffee-counter offerings become more and more complicated, the campaign promotes “the simple perfection of a well-crafted cup of coffee,” says the brand.

The creative, taglined “Craft Each Day,” is the first for Nescafé Taster’s Choice from its new agency, Doner LA.

The campaign aims to overcome consumers’ perception of instant as inferior to fresh by conveying the brand’s farm-to-shelf story, emphasizing the quality of beans and the processes used to ensure exceptional taste.
It also conveys the convenience factor, and works in another point of importance to today’s coffee fans: sourcing.

There are also several videos for digital media that focus on various aspects of the brand’s story, while also showing off the new glass packaging that’s meant to differentiate it and reinforce the quality message.

The spot and videos are on the brand’s YouTube channel, other social media channels and its site. The videos are also being used in digital advertising.

The site also offers a video that actually instructs those new to instant in the art of making an optimal cup: “Too strong? Add water. Too weak? Add coffee...”

Content on social will also offer tips on making the perfect cup, and recipes for craft flavors such as caramel chocolate and pumpkin latte.