NHL Reaches Out To Fans With Increased Digital Presence 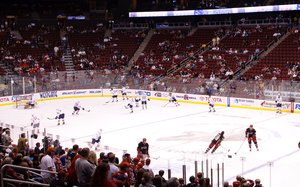 Hockey fans have more ways to connect with the National Hockey League and their favorite team.

First up, the NHL in launching a new mobile app called Arena that is similar to the Ballpark app created by Major League Baseball Advanced Media.

The similarity between the apps makes sense with NHL and MLB Advanced Media in the midst of a six-year, $600 million partnership wherein MLBAM controls the digital assets of the NHL. In return, the NHL gained a stake in BAMTech, the streaming technology provider for the WWE, HBO, NHL and MLB.

Arena will give NHL fans attending games and other live events at 12 participating teams’ home arenas access to the customized and comprehensive mobile app venue experiences.

The first-generation version of Arena will be free to download, and available for iPhone and Android. It will allow fans attending live events to search events with a complete calendar, buy and manage their tickets, enter with mobile tickets, get in-app notifications and promotions and order in-seat food delivery. Additional location awareness features and functionality to amplify, share and memorialize fans’ experiences at hockey arenas will continue to be added.

Also, through MLBAM’s previously announced partnership with Bypass, the deal also enables future integration into the Arena app to allow hockey fans to place and pay for concessions orders from their smartphones anywhere in participating NHL venues. Bypass has a wide range of mobile payment products for easy integration into the app and full-venue commerce capabilities.

With the introduction of original team content and customization, the NHL App is now the official app of 25 NHL teams. New for the 2016-17 season, fans anywhere can watch two minutes of live action from every regulation period in every regular-season game

Every NHL team has unveiled an upgraded official Web site for the beginning of the 2016-17 season. The enhanced Web site -- which is mobile-optimized for phones and tablets -- features more original team content, a more user-friendly design interface and new player pages, among other fan-friendly features such as a new home page, scrollable articles, higher quality images, and HD-quality video.

The NHL also is debuting its real-time correspondent (RTC) social media program across its markets. The RTC program is designed to capture up-to-the-moment – and fan-driven – original content for social media and other digital platforms.

Originally tested during last year’s Stanley Cup Playoffs, the correspondents take pre-game photos and videos of fans and the game’s atmosphere and spend the game roving the arena collecting additional fan-friendly, sharable content. This content is then available to be shared across the league’s and clubs’ official social media accounts and their millions of followers and fans.

Live streaming of games via Twitter is also new this year. One out-of-market NHL game per week will be live streamed for free on Twitter. The live stream will be available to logged-in and logged-out Twitter users in the United States.