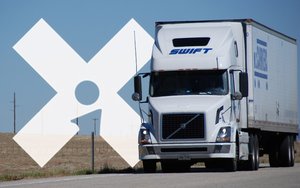 iCrossing will be responsible for all digital marketing disciplines such as media planning/strategy, creative development and data/analytics. The first work will debut in Q1 2017 with an initial focus on business-to-consumer, specifically driver recruitment. The account will be run out of iCrossing’s Scottsdale, AZ office with support from its other locations.

“Digital marketing plays a key role in our driver recruiting efforts," stated Otto Welch, VP recruiting, Swift.  “Driver recruiting is mission critical.  We wanted an agency that understands our business and can be innovative in their approach to helping us reach our aggressive hiring goals. We believe iCrossing is that firm.”

In 2012, Swift worked with NYC-based Bayard Advertising Agency to upgrade Swift's corporate website to "help customers, investors, and the motoring public understand that Swift Transportation is much more than a trucking company."

Swift Transportation is the largest publicly-held truckload shipping carrier in the U.S. Celebrating its 50th year in business, Swift originated and is based in Phoenix, AZ.