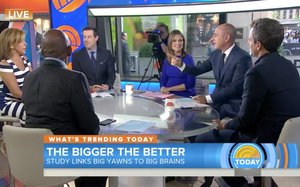 American Express will extend its marketing effort with NBCUniversal on the “Today” next week, eliminating many commercials and adding more content. Financial terms of the deal were not disclosed.

NBC says the marketing push will include 27 minutes of programming. Tune-in promotion for the campaign will begin today, with promos running in-show and on NBC.

This will mean bigger segments during “Today’s” three-hour morning segments, expanding its “Trending” segments in the show’s 8 a.m. hour, as well as opening conversations in the 9 and 10 a.m. hours.

The original effort between American Express and NBC began in February 2016, coinciding with Leap Day.

Over the past year, American Express has spent $141.7 million on national TV, with $28.1 million going to NBC, according to iSpot.tv.

In the most recent two-week period -- September 30 through October 13 -- American Express spent $1.7 million on NBC.